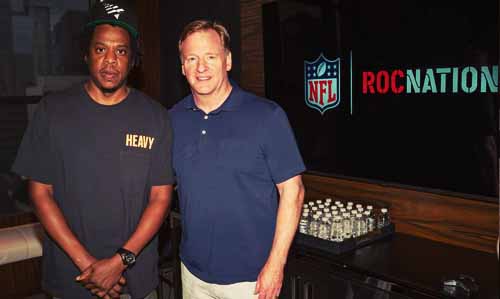 Jay-Z & NFL Team Up on Entertainment and Social Activism

This fuse of entertainment and sport will not only use Jay-Z's Roc Nation to consult on its entertainment presentations, including the Super Bowl halftime show but will work with the rapper and entrepreneur's company to "strengthen community through music and the NFL's Inspire Change initiative."

“The N.F.L. has a great big platform, and it has to be all-inclusive; They were willing to do some things, to make some changes, that we can do some good.”

"I think we forget that Colin's whole thing was to bring attention to social injustice, so in that case, this is a success. This is the next thing."

"But if you have a vehicle that can inspire change or you can speak to the masses and educate at the same time as well, tell people what's going on, so people are not controlling your narrative, not telling you, 'your protest is about this.'"

"I think we've passed kneeling. I think it's time to go into our actionable items,"

This deal is unique in scope and profile, but it’s not the first time the league has tried to improve its image with a new partnership or initiative. The NFL, and its commissioner, Roger Goodell, has earned a negative reputation in the past few years for its social justice efforts, treatment of its players, and front office diversity—despite the sport’s place as one of the most powerful, profitable, and enduring icons of American culture.

With the 2019 NFL season set to kick off on September 5, this is likely just the beginning of what’s to come from this partnership we’ll see if the NFL and Goodell get the credibility boost they’re looking for.

At this point, it's unclear how athletes and hip-hop is taking the news. So far, we’ve seen more of a reaction from media than athletes on social media.