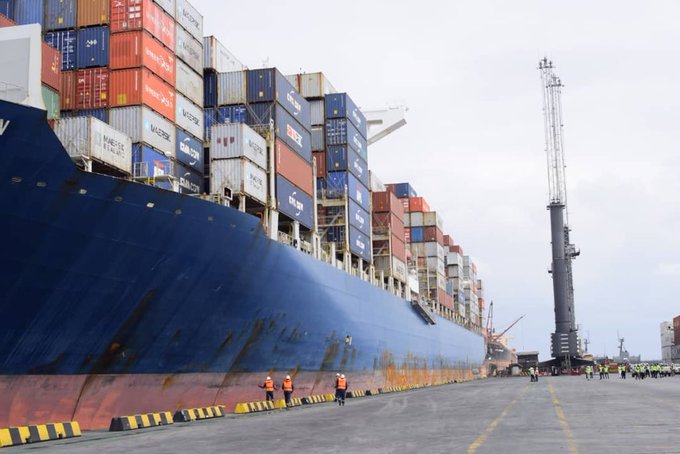 Onne-Eleme port aka Onne Port situated on the Bonny River Estuary along Ogu Creek has become the first Nigeria Port Complex to receive the biggest gearless Maerskline vessels at the Federal Ocean Terminal (FOT). The vessel which arrived on August 15 is said to be 300 metres long, 48 metres wide and has a capacity of 9,971(TEUs). The Nigerian Ports Authority (NPA) Managing Director, Hadiza Bala-Usman represented by the Assistant General Manager Harbours, Captain Uduiguomen Eboreime expressed happiness for the safe arrival of the vessel and added that the NPA is determined to ensure that eastern ports remain attractive to shippers.

General Manager, Corporate and Strategic Communications, Mr Adams Jatto, added that the vessel, which had a capacity of 9,971(TEUs) was a flagship from Singapore.

“The vessel, which was brought in from Fairway Bouy Bonny, with the aid of three Tugboats, operated by three of NPA’s pilots was received by the Manager of the Onne Ports, Mr Alhasssan Abubakar. NPA is delighted to state that the landmark arrival of the biggest gearless Maerskline vessel at Onne Ports is a result of management’s determination to improve the patronage of the Eastern Ports.

“It is an indication of the fact that the Eastern Ports are equipped to receive all manners of vessels and an expansion of the options of consignees in the eastern and northern parts of the country.

“The management of the NPA congratulates its team at Onne Ports.

“Management also appreciates all stakeholders at the Onne Ports for their cooperation toward seeing that the vessel berthed safely without any challenge.”

The Port Manager, Mr Alhassan Abubakar, who received the vessel along with some Onne port team, described the arrival of the vessel as a milestone attained by NPA. “I give kudos to NPA MD. She made this ‘landmark/achievement today possible. This is the first time such a gigantic container vessel is calling at any Nigerian Ports,“ he stated.

He stated that the arrival of the vessel is a trial, adding that the port is well equipped with all facilities and equipment to receive the vessel.
Noting that the vessel was brought in from Fairway Bouy Bonny by NPA’s three pilots who are well trained on pilotage of such vessel.

“We deployed three TUG Boats with three pilots from Onne Port Complex, and for us, the successful arrival of this vessel showcased the expertise of NPA’s ports operations.

“The vessel arrived safely without any security challenges of any type, indicating that the security status of Onne Channel has improved tremendously and the channel depth has also been improved and maintained to receive such large modern vessels,” Abubakar stated.

Captain Marvin Omovbude concluded by congratulating the NPA MD for making this possible, saying that Onne Port is taking the lead in ports operations and efficiency among the ports in African Sub-region.

“The executive management of the Nigerian Ports Authority, led by Hadiza Bala-Usman, has been implementing deliberate policies to promote the patronage of the eastern ports by given incentives and provision of port facilities and dredging of the channel“.