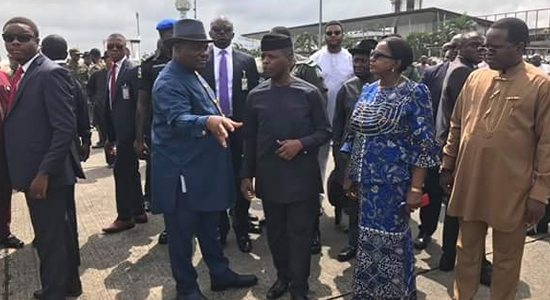 Acting President Yemi Osinbajo will visit Port Harcourt today to inaugurate the world’s biggest fertilizer plant built by Indorama Eleme Fertilizer and Chemicals Limited. Mr Laolu Akande, the Senior Special Assistant to the Acting President on Media and Publicity, made the announcement in a statement issued in Abuja on Wednesday.

According to the presidential aide, the plant with production capacity of 1.5 million metric tons of Urea fertilizer is considered the world’s largest single-train Urea plant.

Eleme Petrochemicals Company Ltd, now Indorama Eleme Fertilizer and Chemicals Limited, was privatised in 2006 after the sale of Federal Government’s 75 per cent shares to a core investor through competitive bidding process.

The plant has a production capacity of 4,000 metric tons of nitrogenous fertilizer per day. It was built with $1.5 billion dollars.

The opening of the plant is expected to boost the agriculture sector not just in Nigeria, but also in Africa and beyond.

Akande said fertilizer from the plant would be made available to farmers nationwide at affordable cost.

This will boost crop yield for farmers and help in minimizing food grain deficit in Nigeria, Akande said.

The main plant, measuring approximately 40 hectares, is located within the perimeter of Indorama’s existing petrochemical site in Port Harcourt.

The Gas Pipeline for the fertilizer plant was constructed by IEFCL within an existing 15 meter wide Right of Way (“ROW”).

Part of the $1.5billion was used to build a new jetty at Onne Port on a plot of land measuring approximate 6 hectares

The jetty comprises 320 m long Quay along with terminal infrastructure including all material handling facilities necessary for urea and a urea storage facility with a capacity of 45,000 MT.

The transfer of urea from the fertilizer plant will be by road via an existing road network.