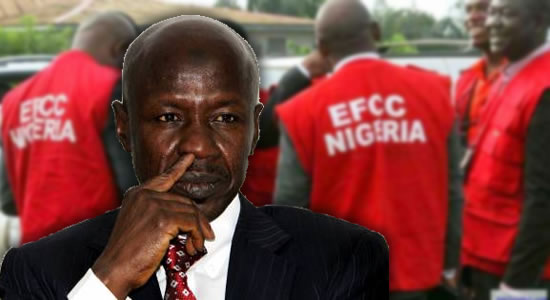 The Economic and Financial Crimes Commission, EFCC on Tuesday said it has arrested 105 suspects and secured 32 convictions in cases of cyber crimes within the Port Harcourt region.

The Port Harcourt’s Zonal Head of EFCC, Abdulrasheed Bawa, made the disclosure while briefing newsmen on the arrest of two suspects on the FBI list, Ogbonna Atuokari in Port Harcourt and Chidi Egbeonu in Owerri.

He disclosed that besides the arrest, 41 persons are facing prosecution, while sixty-three other cases are still being investigated. The Commission also disclosed that it secured 149 convictions between January and August this year in cases related to crude oil theft.

“The Port Harcourt’s Zonal Office of the EFCC is working seriously on 13 different cases of cyber crimes in collaboration with the FBI. Among the cases are those of recently arrested duo of Ogbonnah Atoukarito, formerly based in Lo don and Alpha Chidi Egbeonu, formerly based in Japan.

“The suspects were separately arrested in Port Harcourt, Rivers State and Owerri, Imo state. Atoukaritou is a leader of a loose syndicate of fraudsters engaged in Business Email Compromise, BEC while the other suspected, Alpha Chidi Egbeonu, is suspected to be involved in defrauding IS-based victims and other yet to be identified victims through buying and selling of goods online.

“Generally, the Port Harcourt’s Zonal Office is peculiar on the investigation of crude oil theft and illegal dealing on oil-related products. The last 8 months have been months of intensive and extensive investigations and prosecution of oil-related and several internet-related cases which the zone has recorded 149 convictions, made N268,934,375.75; $2,012,568.00 and £15,000.00 recoveries and have 162 cases in court.”