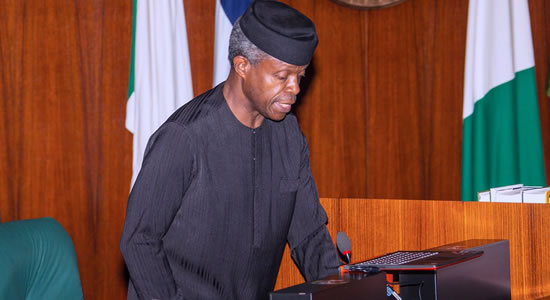 According to Dailypost, Osinbajo’s trip to Norway was in pursuance of President Muhammadu Buhari’s Economic Recovery and Growth Plan, ERGP, and at the invitation of the Prime Minister of Norway, Erna Solberg. The summit, which started on Monday, will run till Wednesday.

The report quoted a statement issued by Osinbajo’s Media Aide, Laolu Akande, as saying the Vice President, who had earlier this afternoon attended an Extraordinary Federal Executive Council, FEC, meeting at the Presidential Villa, is expected back on Thursday.

The statement reads: “In pursuit of the Buhari administration’s Economic Recovery and Growth Plan, ERGP, especially regarding the active mobilization of foreign investment, Vice President Yemi Osinbajo, SAN, will be honouring a personal invitation of the Prime Minister of Norway, Erna Solberg, to attend the Nordic-African Business Summit in Oslo this week.

“The invitation is a long-standing one and the event, holding from Monday to Wednesday, is being organized to give particular prominence to trade and investment ties between Africa and the Nordic countries of Denmark, Finland, Iceland, Norway, and Sweden.

“The summit will attract the largest Nordic companies doing business or interested in doing business in Nigeria, with interests in agriculture, light manufacturing, transportation, digital technology and entertainment, oil and gas, and renewable energy.

“Specifically, Prof. Osinbajo would, among other critical issues, be speaking on the strides made by the Buhari administration in improving the economy and human capital development.

“The Vice President will also headline a specific Nigeria-focused investment roundtable, which is expected to lead to increased trade and investment into Nigeria by building confidence about business prospects in the country and its role as an economic gateway into Africa.

“There will also be a high-level plenary session at the summit to be attended by Crown Prince Haakon of Norway, featuring the Nigerian VP, Deputy President of South Africa, David Mabuza, and other global business and government leaders. That plenary session would be moderated by Financial Times editor David Pilling.

“Also, while in Oslo, the Vice President would hold a bilateral meeting with the Prime Minister to discuss issues of mutual interest to both countries, including bilateral cooperation, especially trade and private sector investments, as well as regional and multilateral issues of mutual concern.

“In extending its invitation to the Vice President, the Norwegian government noted that Nigeria’s participation in the summit would contribute considerably to its success, as the country “plays a crucial regional leadership role and has the largest economy in Africa.”