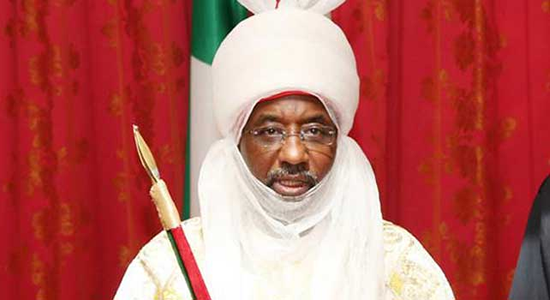 The Emir of Kano, Mohammadu Sanusi II has greeted with approval the step taken by the federal government to shut down the Nigerian land borders with neighbouring countries, saying it is the only way the anti-smuggling laws could be enforced.

The Emir made this statement at his palace while briefing Journalist on the sideline of recent appointments into the national economic advisory council by Mr President.

He said the porous border was responsible for highest incidents of tax evasion and avoidance been perpetrated against the federal government resulting as an escape route from exercise duties and tariffs as well as diversion of petroleum product in the country.

The former CBN governor said that the border closure will revamp the agricultural sector and make the economy workable in the country.

In his statement, “If you remember when the president visit to Kano on official tour, I talked about closing the borders with the Republic of Benin. I always felt that if you really want to enforce laws that you have against smuggling you need to close borders, you have petroleum products moving across the borders from Nigeria to neighbouring countries because of our fuel subsidies.  You have goods coming in across the border using the port in Cotonou to avoid tax revenues in Lagos. So what happens is we don’t get the revenue from duties and tariffs and then we end up having the goods coming in anyway.

He admitted that closing the border was the last option left to the government as the neighbouring countries were not ready to help our situation.

He added, “For instance, if you want to protect rice farmers, you have to impose heavy taxation on importation of foreign rice into the country.

According to the monarch, any country that allows smuggling of rice into Nigeria through its land borders is doing so to the detriment of a Nigerian rice farmer who could not withstand competition with foreign rice producers. Adding that drugs are also part of the item that are being smuggled with these items.