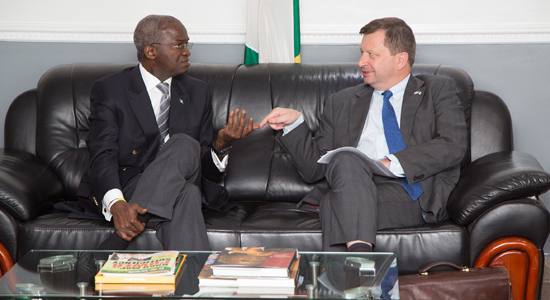 Britain has expressed its readiness to invest in pipeline infrastructure, renewable energy, gas and power of the Nigerian Oil and Gas Industry.

The High Commissioner also urged the Federal Government and the NNPC to organize a road show in London to create awareness on the possible investment opportunities available in the Nigerian Oil and Gas sector.

Mr. Arkwright said so many British investors had funds which they were willing to invest in Nigeria, stressing, however, that the process of obtaining Nigerian visa in United Kingdom was cumbersome with three different levels of visa procurement fees as well as Nigeria’s postal order system.

NNPC’s spokesman, Mr. Ughamadu, on behalf of the Group Managing Director of the Corporation, Dr. Maikanti Baru, condoled with the British Government over the recent terror attacks in the United Kingdom.

Ughamadu, who lead the NNPC delegation, commended the High Commissioner for the Commission’s promptness in issuing visas to officials of the Corporation.

He assured that NNPC would sustain the cordial relations.